Grab your broadsword and put on your war paint, Gameboard is ready for battle with the addition of new card games, strategy games, and battling games!

I just got back from the Dallas Toy Fair and it was great to reunite with so many friends and meet people in person for the first time. It’s been a longtime coming.

At Gameboard, we’ve been crazy busy on a number of fronts and I thought that I’d share some of those updates. The great news is, we’re rapidly moving towards launch with lots of big news.

OUR GAMEBOARD LIBRARY IS GROWING

I have the best job! My days are filled with talking to game publishers small and large and I am thrilled to see our content library grow. To date, we have signed on nearly three dozen publishers with many more to come. We are building the industry’s biggest and broadest boardgame library and we’d love to welcome you and your games to be a part of the Gameboard family. And with the launch of Gameboard Studio, our own digital game development group, we can even develop the digital version of your games for you without any out of pocket costs! If you’d like to see your games on Gameboard, give me a shout!

Here’s a taste of some of the games coming soon: 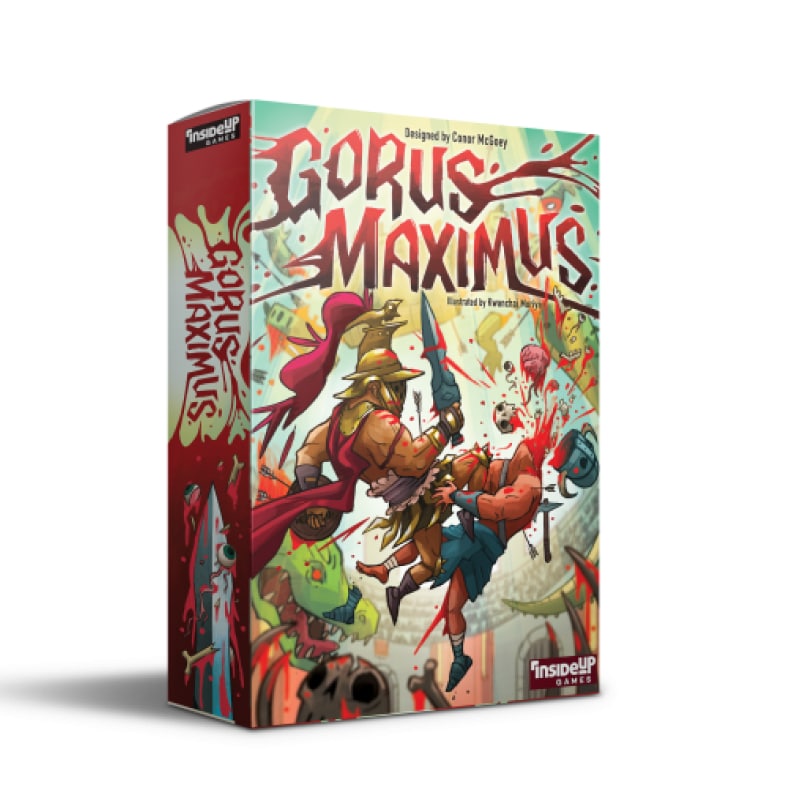 GORUS MAXIMUS (INSIDE UP GAMES)

Gorus Maximus is a bloody trick-taking game of gladiatorial combat in which the trump suit can change mid-trick! The game can be played "player vs. player" or in teams.

Dispatch your strongest gladiators and most ferocious beasts to earn crowd favor! Match the rank of the last gladiator played, and the trump suit changes immediately! 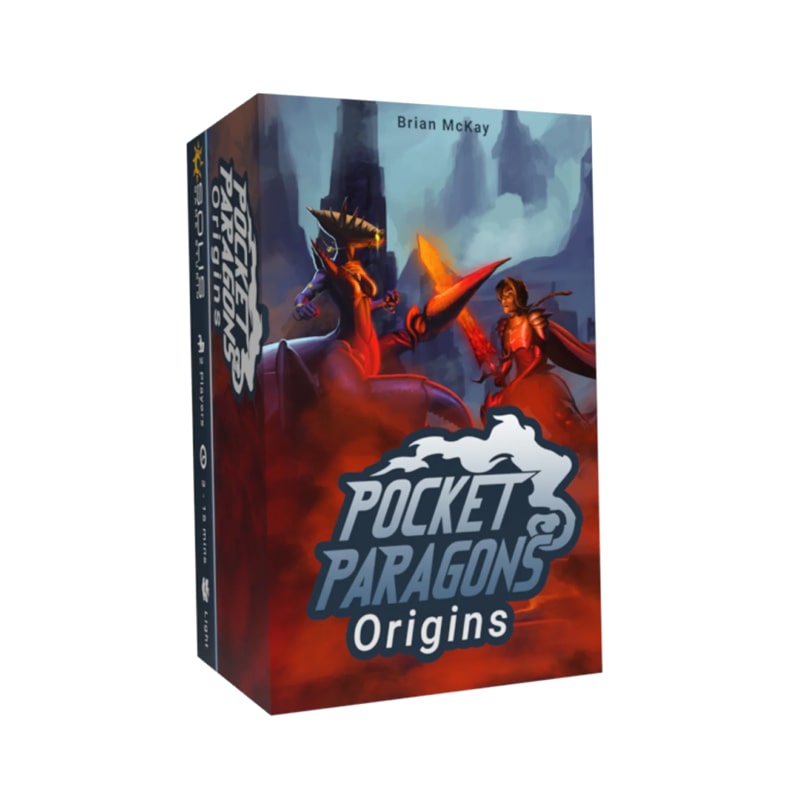 Each player chooses a paragon and takes their deck of 7 unique cards. Every turn, players choose a card from their hand and play them simultaneously. Both cards are revealed and then characters either take damage, have their card canceled and sent back to their hand, or are defeated. Play the right card at the right time and have a strong read of your opponent's intentions to win! 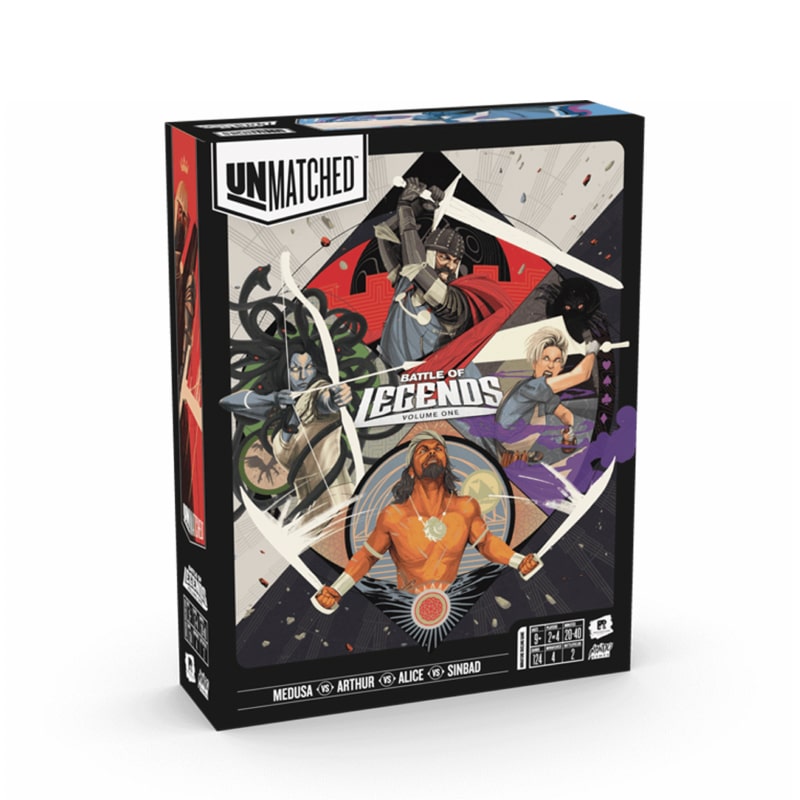 Unmatched is a highly asymmetrical miniature fighting game for two or four players. Each hero is represented by a unique deck designed to evoke their style and legend. Tactical movement and no-luck combat resolution create a unique play experience that rewards expertise, but just when you've mastered one set, new heroes arrive to provide all new match-ups.

Combat is resolved quickly by comparing attack and defense cards. However, each card's unique effects and a simple but deep timing system lead to interesting decisions each time. 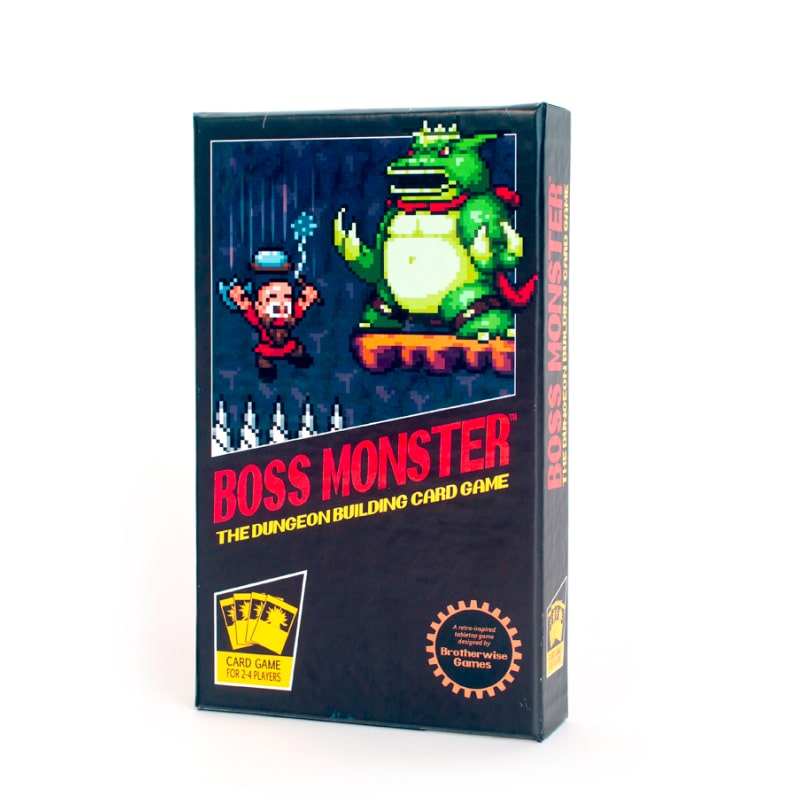 Inspired by a love of classic video games, Boss Monster: The Dungeon Building Card Game pits 2-4 players in a competition to build the ultimate side-scrolling dungeon. Players compete to lure and destroy hapless adventurers, racing to outbid one another to see who can build the most enticing, treasure-filled dungeon. The goal of Boss Monster is to be the first Boss to amass ten Souls, which are gained when a Hero is lured and defeated — but a player can lose if his Boss takes five Wounds from Heroes who survive his dungeon. 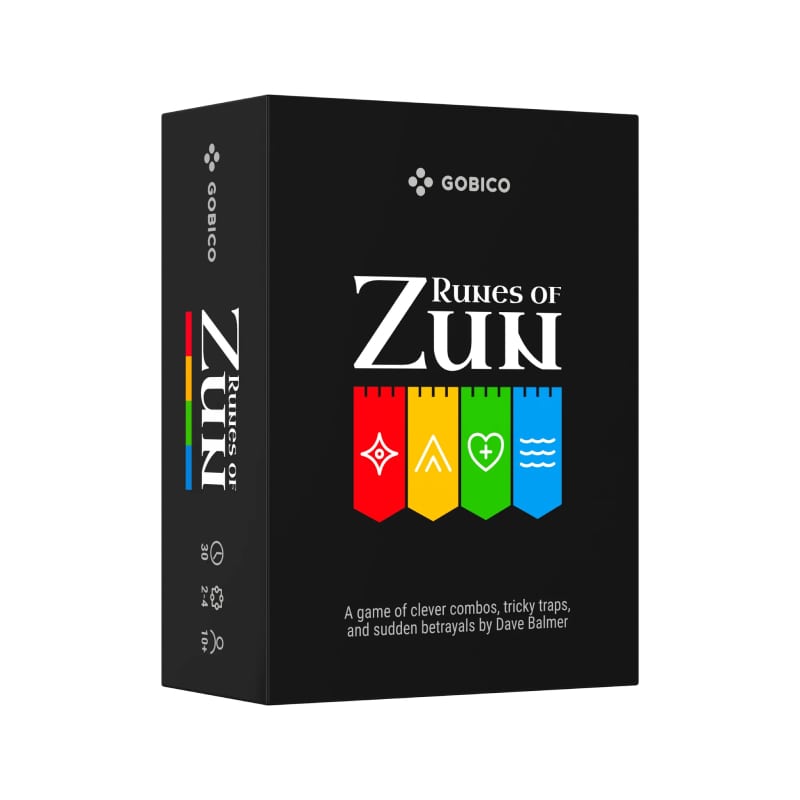 Play as a Runecaster in the realm of Zun. Magic runes from a long-forgotten war fill the land. You are one of few with the gift to control them. With skill and a little luck, you may turn the tide!

Runes of Zun is a card-dueling game of magic and mayhem for two to four players. It's easy to learn and draws inspiration from collectible card games and deck builders but without all the fuss of collecting or building a deck. 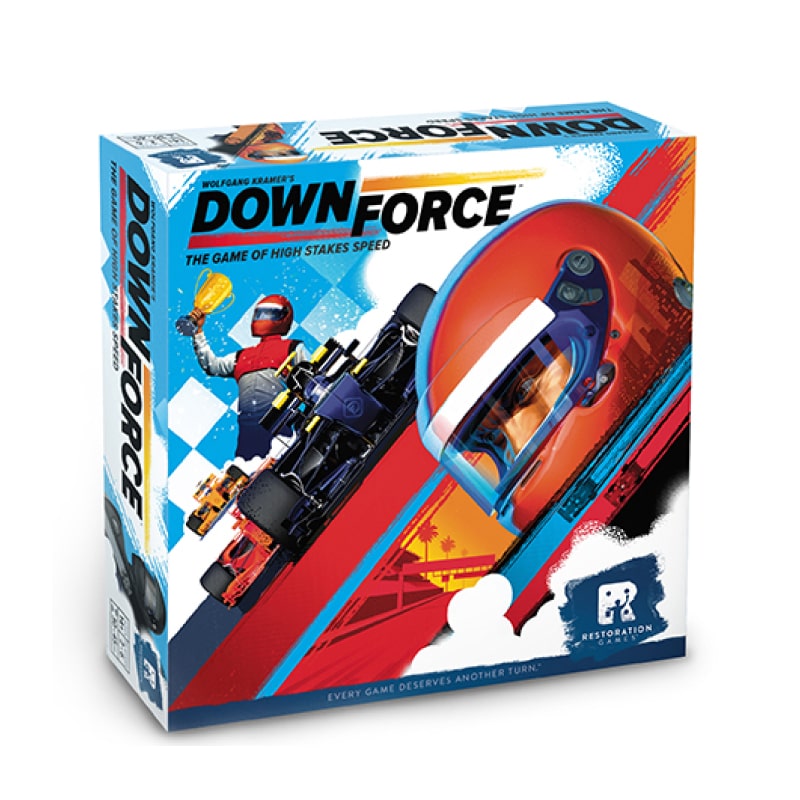 Downforce is a card-driven bidding, racing, and betting game for 2-6 players based on Top Race, the award-winning design by the legendary Wolfgang Kramer. Players first bid to own the six cars in the race, then they play cards from their hand to speed them around the track. However, most cards will also move their opponents' cars. So figuring out just the right time to play a card is the key to victory. Along the way, players make secret bets on who they think will win the race. Whoever has the most money from their prize money, winning bets, and remaining bank wins. 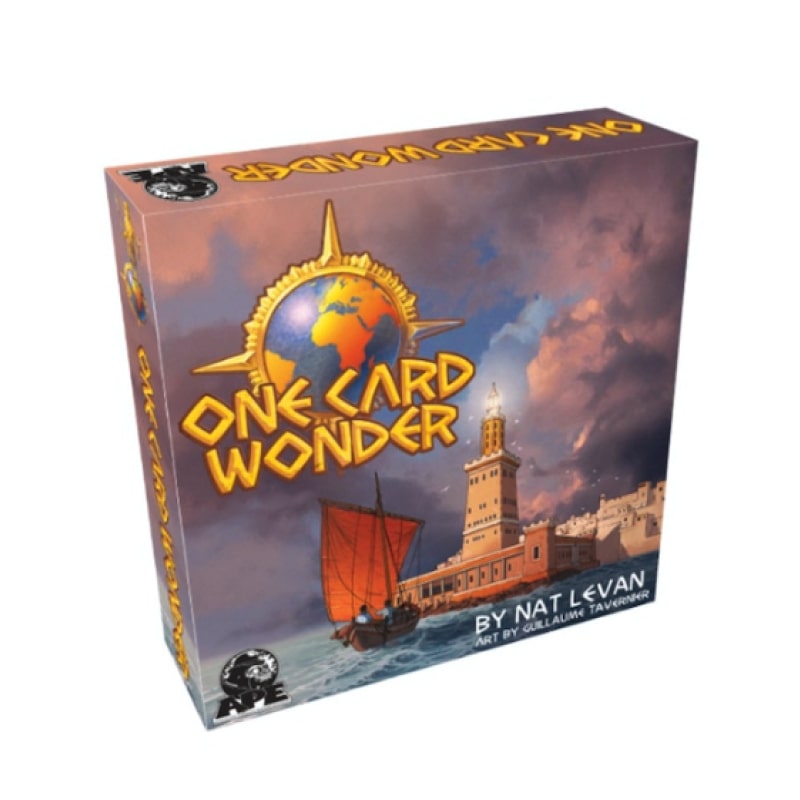 In One Card Wonder, each player receives a card that shows a wonder of the ancient world and a set of support buildings. The multiple stages of the wonder must be built from the ground up, while the buildings may be built in any order using the resources at your disposal. Players have four worker meeples and a personal supply of resources, and a general supply of resources also exists. The first player to gather the resources they need and complete their wonder wins!

That's it for this week, and I hope you will join us during our Office Hours and in our Discord Community. See you soon!

Boards are flying out the door as we speak! Our team has been shipping hundreds of Gameboards to our initial Kickstarter fans as well as our Influencer audience. As more and more fans play Gameboard, we’re getting terrific data on how to improve the play experience. Check out our latest video of our team in action. 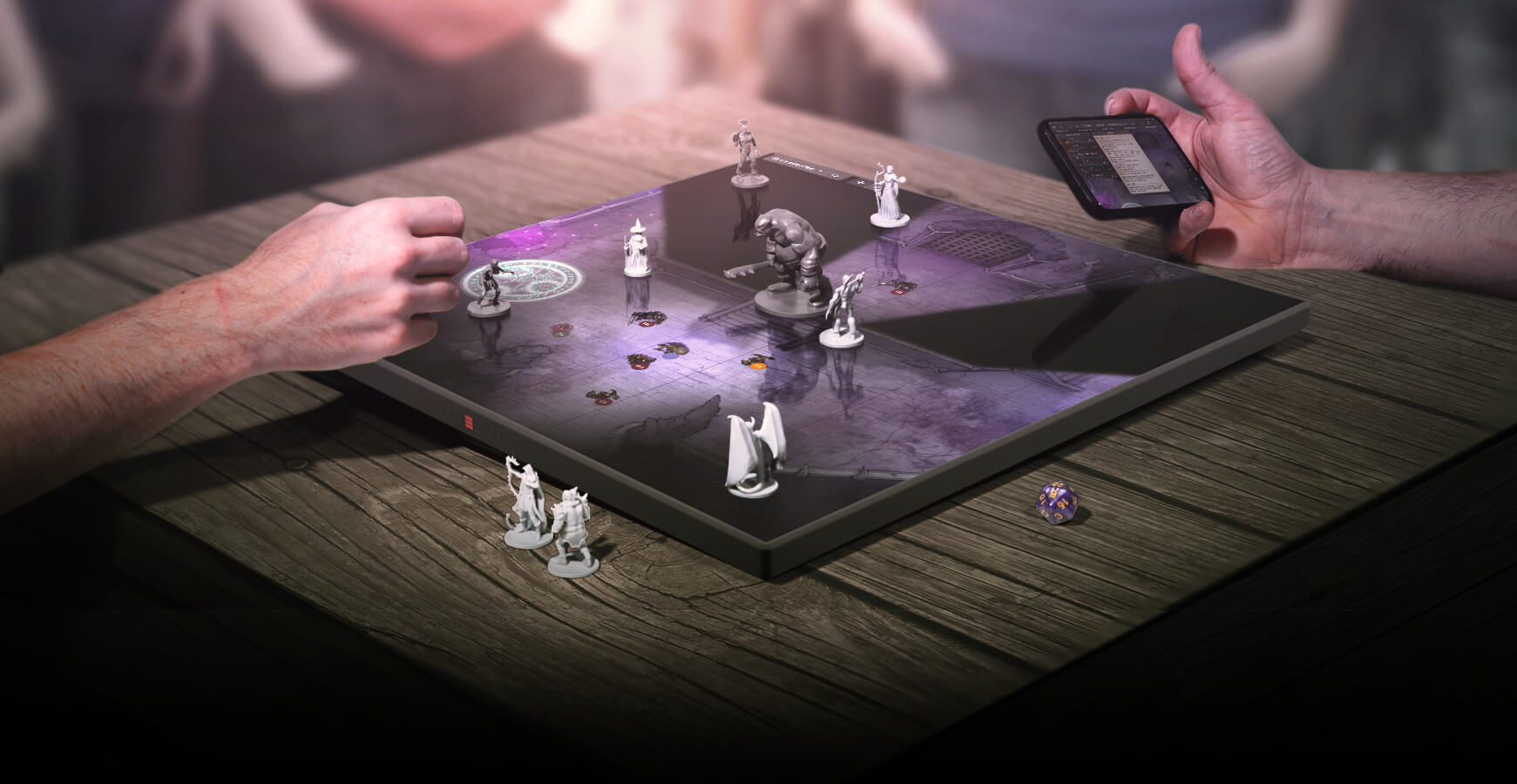 Our mission is simple: provide a platform that connects people through their love of board games. We’ve built this new physical-digital platform that allows your fans to download their favorite board games and play instantly. Think of it as the Netflix of Board Games. Gameboard’s intuitive touch technology brings players into the gameplay and provide a unique and engaging experience like no other.